Home All Wolves 2-1 Arsenal: David Luiz & Bernd Leno sent off as Gunners...
All 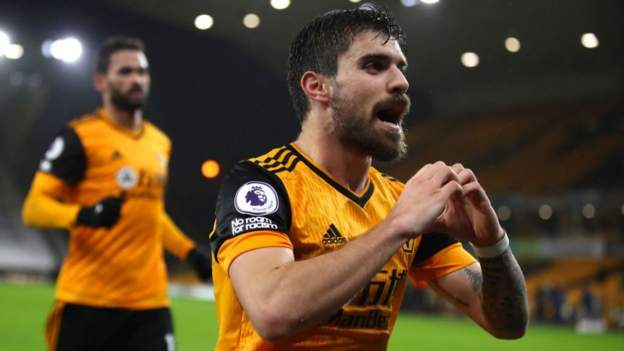 Arsenal had two players sent off as they threw away a lead and lost to Wolves – who won for the first time in nine Premier League games.

The Gunners, who had earlier hit the woodwork twice and had a goal disallowed, went ahead when Nicolas Pepe held off two Wolves challenges and curled a fine finish into the net.

But Arsenal were reduced to 10 men when defender David Luiz brought down Willian Jose, with Ruben Neves equalising with the resulting penalty in first-half injury time.

Joao Moutinho scored with a brilliant strike from 30 yards out to put the hosts ahead soon after the restart.

However, the Gunners were then reduced to nine men as goalkeeper Bernd Leno handled the ball outside of his penalty area after racing out trying to deny Adama Traore.

This was Wolves’ first league victory since a 2-1 victory at Molineux against Chelsea on 15 December, although they had also won two FA Cup ties – against Crystal Palace and National League North side Chorley – since then.

Wolves remain in 14th and Arsenal – who would have gone sixth with victory – stay 10th, eight points behind fourth-placed Leicester City in the final Champions League qualification spot.

The turning point came in first-half injury time when Arsenal were leading 1-0 and were dominant.

Daniel Podence played the ball through to Jose and the Brazilian, on his home debut, had his heel clipped from behind by compatriot Luiz.

Referee Craig Pawson decided that Luiz had made no attempt to play the ball and sent the centre-back off. It was Luiz’s third red card for Arsenal after also being dismissed in the 2-2 draw at Chelsea in January 2020 and then again in the 3-0 loss to Manchester City in June.

After the match, both managers had contrasting opinions with Wolves boss Nuno Espirito Santo saying Pawson had “no other option” but to award the penalty and send off Luiz.

However, Gunners manager Mikel Arteta said he “cannot tell you where the contact is” and suggested the club may appeal Luiz’s red card.

Wolves, whose main threat had been restricted to set-pieces and long-range efforts, equalised with Neves’ penalty, which he fired into the top corner.

Gunners boss Mikel Arteta made a defensive substitution at the break as centre-back Gabriel came on for forward Alexandre Lacazette, but it only took the hosts four minutes of the second half to go ahead, through Moutinho’s superb strike.

The visitors brought on Pierre-Emerick Aubameyang for goalscorer Pepe in the 61st minute in an attempt to rescue something from the game.

But Leno made a shocking decision in the 72nd minute as he sprinted out of his box, trying to reach the ball before the pacey Traore, but the goalkeeper misjudged the bounce, handled the ball and was dismissed.

With Mat Ryan, who signed from Brighton last month, injured, third-choice goalkeeper Runar Runarsson was given a Premier League debut.

The 25-year-old Iceland international, signed for £1.8m from Dijon in September, did well to deny Pedro Neto and substitute Vitinha as Wolves looked to finish the game off.

That left Arsenal largely playing with two banks of four, in defence and midfield, with long spells of no-one playing up front before they could regain possession.

Aubameyang and Hector Bellerin had shots from the edge of the penalty area blocked, but the Gunners could not force an unlikely equaliser.

Arsenal’s first-half display a plus for Arteta

When these two sides met on 29 November at Emirates Stadium, Wolves won 2-1 and Arteta was facing questions over whether he would lose his job with the Gunners down in 14th.

Arsenal had gone into Tuesday’s game on an unbeaten run of seven Premier League matches and the Spaniard will surely be disappointed they did not extend that sequence, because they could have taken the game beyond Wolves in the first half.

The Gunners nearly went ahead inside the opening 40 seconds when Saka hit the post after a fine pass from the excellent Thomas Partey.

Saka then had an effort saved by Rui Patricio before the England midfielder did put the ball in the net, but it was ruled out by the video assistant referee because Lacazette was offside in the build-up.

Pepe was denied when his strike was superbly pushed on to the crossbar by Patricio, but the Gunners’ record signing did get on the scoresheet when he did superbly to nutmeg two Wolves defenders before curling the ball into the far corner.

At that point, it looked like Arsenal would run away with the match, but the penalty and first red card on the stroke of half-time changed everything, with the Gunners unable to create any real opportunities in the second half.

‘I cannot tell you where the contact is’ – what they said

Wolves boss Nuno Espirito Santo said: “Everything changes with the penalty, the dynamic of the game changes there. I think the referee doesn’t have any other option in both situations [the penalty and the red card for Luiz].

“The [Moutinho] goal is amazing. He is such a talented player and he deserves this moment. It’s a very welcome win. It means a lot, we have been in a tough moment.

“We have done many beautiful things in past seasons and we want to emulate them again. The standards are very high and we have to chase them.

“We cannot allow ourselves to ever put our heads down. I will not allow our players to stop believing in themselves.”

Arsenal manager Arteta told Match of the Day: “The team was really on top of the game, we should have been three- or four-nil up and in that action [the Luiz red] the game changed completely.

“The team kept trying, kept playing, kept believing. At half-time, the boys were so animated because they believed they could still win the game. Obviously it was an incredible goal from long range, before that they didn’t have any chances. But still we lost and we have to react.

“We hit the post, hit the bar, the keeper made a couple of great saves. We played exceptionally well, scored one goal and should have scored three or four and had more of a gap, but obviously you concede two red cards in the Premier League. I don’t have any [complaints about] the second red card.

“The team is encouraging me every day to believe in them and to give me a positive feeling all the time.”

Wolves do the double over Arsenal – the stats

This was the first of three successive home matches for Wolves, who take on Leicester in the Premier League on Sunday (14:00 GMT) and then play Southampton in the fifth round of the FA Cup on Thursday, 11 February (17:30).

Arsenal are in the West Midlands again for their next match as they face Aston Villa in the league on Saturday (12:30).

Player of the match

The militants are battling to take control of a provincial capital for the first time in years. Source link
Read more
All

The latest news from around the world. We provide you with the latest breaking news and videos.